Hemp vs Marijuana: What’s the Difference?​

Due to years of misinformation It is easy to confuse Hemp vs Marijuana.

With the US federal government standing by the judgement that the cannabis plant has no medicinal value, Marijuana remains a schedule 1 drug and a lack of research to date coupled with unsubstantiated hearsay has increased the knowledge gap.

Nonetheless, while most people are familiar with Marijuana, hemp on the other hand hasn’t got the same notoriety.

It can be especially confusing for people when the words Marijuana and Cannabis are used interchangeably.

So what’s the difference between hemp and Marijuana and how is Cannabis connected to them? 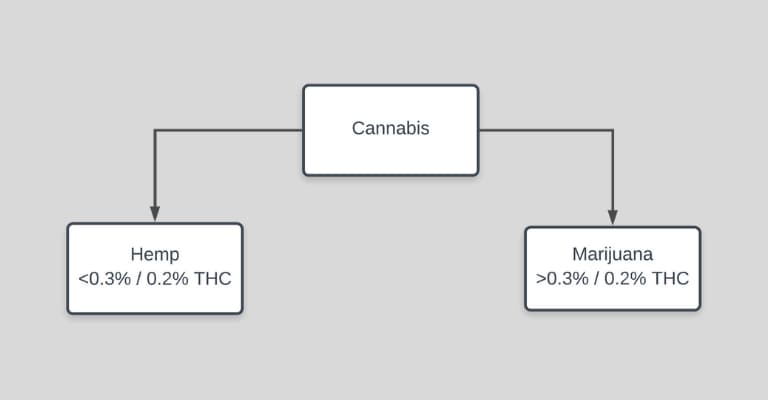 Hemp and Marijuana are types of Cannabis

Cannabis is the genus for all things Marijuana and hemp related. We can think of the two as being closely related but not the same, like brothers, perhaps?

They both fall under the umbrella of the cannabis plant, but the chemical and physical makeup of these plants is vastly different.

Hemp is roughly defined as Cannabis where the THC content is less than 0.2% (EU) or less than 0.3% (USA). For context, street cannabis often features more than 15% THC.

As the THC percentage is extremely low, hemp is non-intoxicating and does not get you high, unlike Marijuana.

Hemp is naturally higher in CBD than Marijuana, and as a result, all CBD oils sold as supplements contain hemp-derived CBD.

In Europe, the classification is a little more complicated, and not all Cannabis <0.2% THC is classified as hemp. The strain also has to originate from an EU approved Industrial hemp list.

The strains on the EU Industrial hemp catalogue are naturally more fibrous and offer little in terms of flowering buds when compared to hemp overall. This is because these hemp strains are approved primarily for the use of the stalk, stem and seed for ‘industrial’ purposes.

As a result, these hemp plants often yield lower levels of THC and other cannabinoids than their US counterparts.

This is because growing hemp in the US is not constrained to growing specific strains with little foliage, in addition to the fact a higher THC percentage is permitted, which is often correlated with a higher level of CBD and other cannabinoids.

Consequently, in the US, hemp can yield above 15% CBD, but this isn’t a trend we often see in Europe given the constraints above.

In the UK, as harvesting the CBD flower is illegal, it doesn’t make much difference anyway…For now. 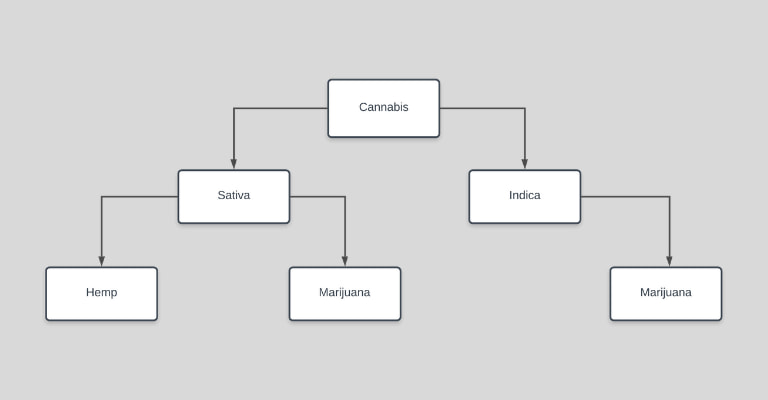 While THC classification can split Cannabis, it’s important to note that there are two subspecies of Cannabis outside of the genus split between hemp and Marijuana.

Cannabis strains are often known as Cannabis Sativa or Indica, which denote the profile of effects a user usually feels from using the strain.

For example, Indica strains are associated with a heavy body effect and the a-typical stoner associations of couch lock. Sativas, on the other hand, is said to be energising and provide more of a cerebral effect pairing well with daytime use.

Sativas also look different from Indicas. Cannabis sativa is thought to be indigenous to Asia, the plant grows tall in height and has thin leaves. Whereas Indicas are thought to originate from the Asian subcontinent, they have small but thick leaves and are short in stature.

Hemp stains are always a subspecies of Cannabis Sativa.L and cannot be Cannabis Indica which is always Marijuana.

While you might see CBD hemp oil which is labelled as day and night, these are always derived from sativa hemp strains. It’s more likely these products contain different terpene formulations which influence the effect, as is the case with  CBD Oils.

Marijuana will get you high!

Marijuana, on the other hand, is the Cannabis status quo.

By taking the reverse definition, if it contains >0.2% THC (EU) or >0.3% THC (USA) it is marijuana. On average it contains a double-digit THC percentage and is highly psychoactive.

If consumed users feel ‘high’ and CBD concentrations are on average very low (under 0.5%).

Although, In the US, this is starting to change with the influx of interest in hemp-derived CBD products and marijuana growers trying to catch the wave of interest.

Marijuana strains are actively being bred to develop Cannabis to contain higher CBD ratios, and as a result, lower THC percentages.

This is in an attempt to swing over CBD users who enjoy CBD oil into the recreational marijuana market through more balanced cannabis strains; offering a less intense psychoactive effect but still potentially get you high.

Consequently, It is likely we will start to see a much more significant variation in THC/CBD ratios in cannabis strains through 2020 in states where Marijuana is legal.

Marijuana legalisation is a new wave

In the last 25 years, we have seen a drastic change in the perception of Marijuana for medical and recreational use. With California leading the charge through proposition 215 in 1996.

On the other hand, some countries have already approved the use of Marijuana, making it legal for both recreational and medical use; Including Canada and Uruguay.

This will likely continue to ramp up, with Luxembourg expected to be the next major EU country to head down the legal cannabis route for both recreational and medicinal use. 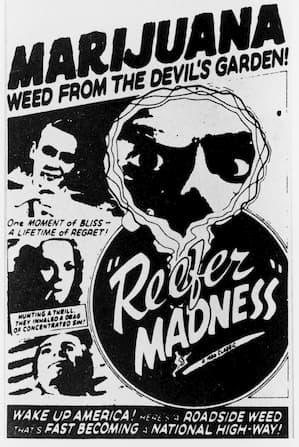 Marijuana isn’t a phrase which has existed side by side to Cannabis until the last century.

In the early 1900s, Mexico was in a state of political turmoil. As a result, an influx of Mexican immigrants fled to the United States. Taking the recreational use of Cannabis and the Spanish terminology for the plant (marihuana aka Marijuana) with them.

The early 1930s brought the end of prohibition. It was then, Harry Anslinger, the commissioner of the Federal Bureau of Narcotics, pivoted his focus to Marijuana.

Anslinger was vocal about the use of Mexican Marijuana, pushing the blame for increased cannabis consumption across the States on the Mexican population.

The public developed a strong affinity between the drug and the Mexican immigrants who had catapulted its use.

Cannabis propaganda fuelled by xenophobia started to take off, and headlines about the presumed effects of Marijuana became centre stage news.

Reefer Madness, a marijuana propaganda film, was released in 1936.
The film depicted teenagers consuming Cannabis for the first time, portraying Marijuana as a gateway drug which led to hallucinations, rape and murder.

While this is now recognised as hearsay, in the 1930s this was the misinformation was all that was in the public domain and there was no question around Hemp vs Marijuana, as it was all thought as being the same thing.

In 1937, all forms of Cannabis were effectively outlawed in the United States under the Marihuana Tax Act. Federal law did not differentiate between hemp and Marijuana, treating them as equals.

However, it was In 1970 with the passing of the controlled substances act, that any form of Cannabis was officially banned in the US.

Since this monumental moment, things have started to change. With the passing of the 2014 farm bill, permitting pilot hemp farms and the more substantial 2018 farm bill, approving hemp <0.3% THC to be grown anywhere in the United States.

Hopefully, we have cleared up the confusion between hemp vs Marijuana! You can find the key points summarised below: