CBD Distillate: What is it and why is it popular?

Distillation is an ancient art of concentrating molecules by using their boiling points to create concentrated compounds.

This methodology has been employed successfully in multiple industries, but it’s most commonly associated with the manufacture of alcoholic spirits, but it’s also how water can be purified.

Still, it’s a method which can be applied universally to any form of chemical separation. In the cannabis industry, distillates are widely used and loved by many.

Their pros of distillates have led to cannabis concentrates such as THC and CBD distillate being spoken about as the future of cannabis.

If you’re here for a quick definition of what CBD distillate is, in short: It’s a type of pure hemp extract. Derived from processing CBD biomass into individual cannabinoids by vaporising the compounds via their boiling points and later adding them together as desired to produce a final product.

As a result, distillate is often referred to as ‘the pure’ due to its high potency and lack of other plant constituents.

More generally, cannabis distillates are increasing in popularity due to their near-infinite applications and lack of impurities.

Let’s jump in to learn more about distillate CBD and the associated products:

CBD Distillation Is A Borrowed Methodology

Distillation can be very roughly defined as follows: 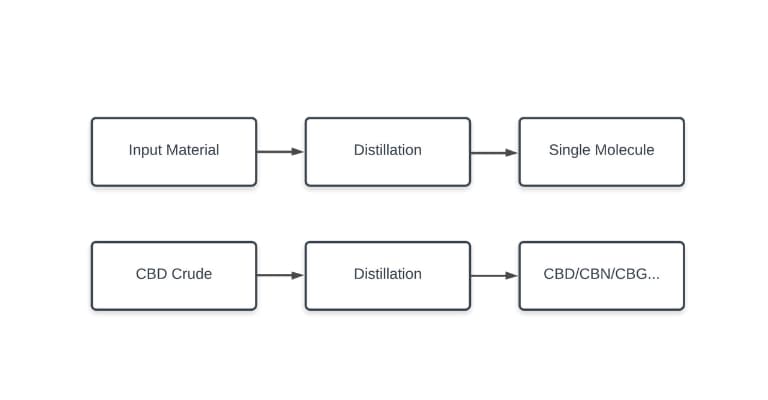 How Do You Make CBD Distillate?

The starting material for creating CBD distillate is hemp biomass which is processed via a solvent such as ethanol or high pressure (CO2 acts as a solvent under high pressure).

This separates the hemp trichomes (where the cannabinoids are concentrated) from the plant material.

This leaves a raw hemp extract known as CBD crude, with a similar look and consistency as traditional crude oil.

The solvent used in extraction also picks up other undesirable compounds such as chlorophyll and plant waxes in the process, which then need to be removed for the highest-quality CBD distillate.

The CBD crude is passed through a process known as winterisation. This is a (semi-optional but highly recommended) alcohol wash followed by an overnight freeze of the hemp extract.

The CBD crude oil is placed in ethanol to remove lipids and waxes from the other plant matter and frozen for 24 hours. 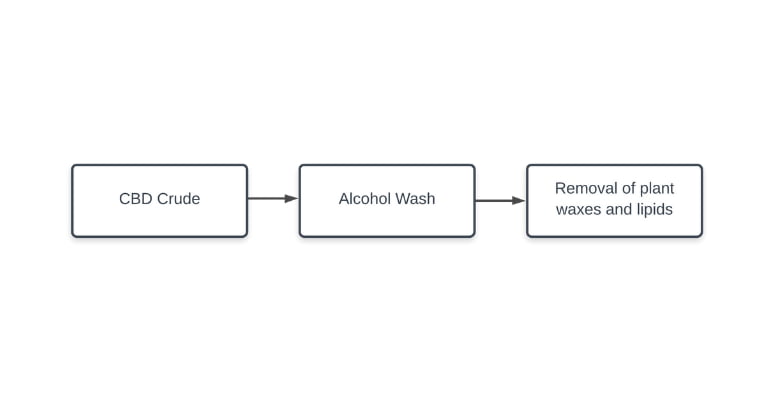 This winterised CBD crude is then filtered to remove the plant waxes which have now separated from the cannabis compounds — followed by heating (decarboxylation) to activate cannabinoid acids into cannabinoids.

This is where crude CBD is passed through a heated flask Isolating the compounds at a molecular level in the solution and passing each compound into a beaker given a specific boiling point while collecting the other impurities in another flask.

The distillation process usually occurs on multiple occasions with different temperatures, using the secondary flask as the input material to separate the variety of remaining compounds and to isolate each one individually given their varying boiling points via vaporisation. 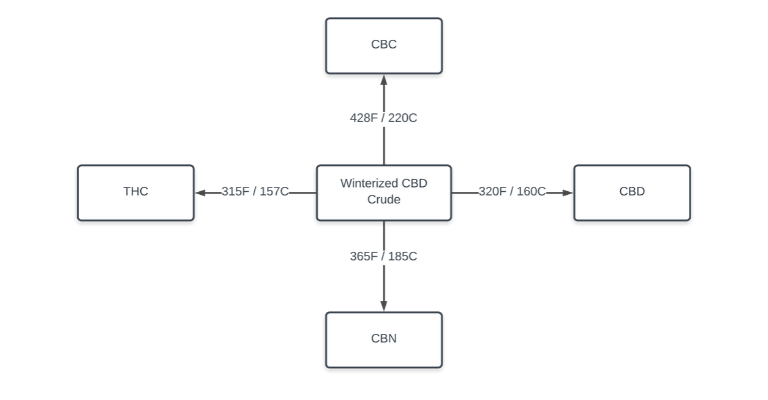 As noted earlier, distillation allows for the separation of compounds at a molecular level. As a result, CBD distillate is initially similar to a CBD Isolate when extracted in that its a single cannabinoid molecule with very high purity.

But that doesn’t mean it cannot be combined with other minor cannabinoids and flavourful terpenes to generate a product which mirrors the plant profile from which it was extracted (albeit minus the unwanted chlorophyll).

Unfortunately, distillation often exceeds the boiling point for terpenes in the process of extracting the cannabinoids from the CBD crude. This is because terpenes are naturally more volatile in higher temperatures and often have lower boiling points when compared to say CBD.

Instead, terpenes are extracted prior to distillation and re-introduced or added to the final product from other plant-derived sources instead.

Consequently, distillates can be seen as parallels to any other forms of different hemp extracts in terms of their chemical profile.

The profile of the final product depends on what type of distillate the manufacturer wants to develop and the quality of their equipment.

The three main types of CBD distillate include:

Broad-spectrum CBD distillate. Similar to full-spectrum but THC has been removed through selective distillation, resulting in a THC free but cannabinoid-rich product.

Other distillate(s): Specially formulated distillate concentrates also exist, usually as a tranche of broad-spectrum. Additional cannabinoids are removed for legal reasons or market preferences. This approach is becoming more common for countries where CBD is permitted, but multiple other cannabinoids are not.

For example, the cannabinoids CBN and THC are controlled substances in the UK, and the 0.2% THC rule you might have heard about doesn’t apply to the CBD products you can buy on the high street. Consequently, CBD distillate manufactured for the UK market often falls into the ‘other’ category.

While distillation is a molecular separator, there is no reason why these single molecules cannot be recombined at the end to yield synergistic effects.

By the nature of distillation, it’s possible to extract single molecules from a substance (e.g. Cannabidiol or Cannabigerol) and combine them with other hemp-derived compounds.

This method can be useful in an effort to work backwards in creating products which fit consumer demand(s).

Manufacturers can control the exact chemical make up of distilled extracts by using the science of distillation to yield CBD products which have a broad or full-spectrum CBD profile.

Making it easy to develop CBD products which are legal and hit the spot in terms of the desired taste profile along with other cannabinoids and reintroduced terpenes to engineer full-spectrum CBD products.

This is possible as cannabinoids have different boiling points, and by heating a hemp extract to a specific temperature, it is possible to extract a single cannabinoid from the substance.

Repeating this process at the various boiling points results in the Isolation of each cannabinoid, which can be recombined later with terpenes to develop a full spectrum CBD product.

It is these qualities that make CBD distillate a unique and highly desirable form of CBD concentrate.

Does CBD Distillate Get You High?

No, it doesn’t get you high! It’s THC which is responsible for the cannabis high, and as CBD distillate contains at max only trace levels of THC and consequently, it cannot get you high.

Depending on the type of distillate, the final CBD product can contain traces of THC if full spectrum or none at all if broad spectrum.

On the other hand, THC distillate which is formulated from marijuana, DOES get you high. But this is unrelated to CBD distillate, and it is not derived from hemp so it isn’t something to worry about.

What Is The Difference Between CBD Distillate and CBD Isolate?

CBD Isolate is the purest form of Cannabidiol, with a purity of 99%+.

While CBD distillate can have potency in the high 80% range and it’s highly potent, there are still some extremely minor residual cannabinoids and other compounds left behind.

CBD Isolate is JUST CBD, nothing else, nada..zero..everything else has been removed.

CBD Isolate is most frequently used in CBD vape juice, where it is combined with vegetable glycerin or propane glycol to create a solution which is vaped (note – these type of products are not full-spectrum and contain zero THC).

Note – CBD distillate can be easily further processed by adding a solvent to the distillate to create CBD Isolate.

The difference between the two CBD concentrates is also notable in the consistency of the hemp extract.

CBD Isolate is an off white powder, whereas full spectrum CBD distillate is a viscous liquid which often crystallises to form a rock-like consistency.

How Is Distillate Used?

CBD distillate is frequently used across a variety of CBD supplements, but the primary uses are:

CBD vape cartridges: Distillate is commonly used in the United States in premium vape devices or dabbed on its own. While this isn’t common here in Europe yet, it allows users to vape without any additives (except natural terpenes of course). While this is more expensive than traditional CBD e-liquids, the fact these vapes don’t use CBD Isolate is favourable to promote the entourage effect.

CBD edibles: Distillate can be tasteless and odourless. In such cases, it means the CBD extract is devoid of terpenes. However, it does allow for multiple cannabinoids without disrupting the taste of a sweet or other edible. If you have tried some of the CBD edibles on the market, you will know what we mean when we say some can taste earthy!

CBD topicals: Again, using a hemp distillate in a topical can ensure there is no earthy odour or colouration.

Nature & Bloom CBD oil is derived from a CBD distillate base (mostly), and then combined with MCT oil and terpenes where relevant.

Most of these CBD supplements are developed using a unique formulation based on broad-spectrum CBD, where THC and CBN have both been removed via selective distillation to non-detectable levels.

We also use different sets of re-introduced terpenes for each product formulation, to promote a daytime boost, nighttime relaxation or relief from your day to day.

Our CBD crumble is also derived a broad spectrum CBD distillate, which has crystallised due to high purity.

To learn more check out the specific terpene profiles via our third party test results page.

Distillate offers most of the advantages of full and broad-spectrum CBD oil while improving the taste. Its’ uses are limitless, and it’s likely we will see more applications for it in the future.

For these reasons, CBD distillate products are more expensive, but they are also the preferred choice for many due to its’ natural versatility.

If you don’t like the taste of CBD oil, want something 100% THC free and the ‘cleanest’ version of CBD you might want to try some broad spectrum CBD distillate products. ⁣⁣⁣

As the CBD sector grows and a larger pool of people indicate an interest in trying CBD oil, taste and the multi usability of CBD extracts will become much more critical.

As a result, it is certain distillate CBD will grow in popularity and be used across a range of different product types.

Nonetheless, some will see this as the start of engineered CBD. In the longer run, as CBD continues to move mainstream, it is likely distillates will become the status quo for use in premium products.